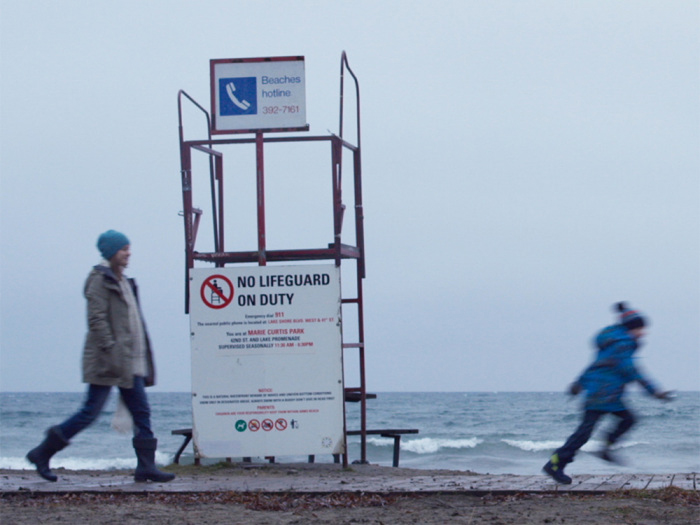 Ma (Brie Larson) and Jack (Jacob Tremblay) explore the outside world in a scene from Room.

For love all love of other sights controls,
And makes one little room an everywhere
– John Donne (1572-1631)

Imagine you are five years old and the only world you have ever known is the inside of a garden shed. In the new film Room, a mother and child share a strong bond in a struggle for survival.

Adapted from the best-selling 2010 novel by Emma Donoghue, Room tells the harrowing story of kidnapped Ma (Brie Larson) who has raised Jack (Jacob Tremblay) in captivity.

Jack makes a thrilling discovery: the outside world. It could be any city, but the locations are all Toronto, including the old Don Jail and Bridgepoint Hospital with sweeping views of the Don Valley. We see Ma and Jack walk along a boardwalk by Lake Ontario, a freedom we take for granted. (I thought this was our Beach, but it is actually Marie Curtis Park in Etobicoke. The sign on the lifeguard stand gave it away.)

From the Page to the Screen

Author Emma Donoghue was born in Ireland, but lives in London, Ontario. She has no complaints about the film adaptation – it helps that she also wrote the screenplay. Book lovers may wonder how much is lost in translation, but Donoghue is thrilled with the film.

At the TIFF premiere in September, Donoghue and the cast were given a standing ovation and Room went on to win the People’s Choice Award, although readers may still claim the book was better.

When asked if director Lenny Abrahamson captured what she wanted, Donoghue replied, “I hate to be disloyal to fiction, but there are places only cinema can reach.” You can read her wonderful “Emma’s Corner” at the film’s official site roomthemovie.com.

Brie Larson is getting rave reviews and Oscar buzz. When she read the book, she “deeply loved Ma and Jack.” Larson called Vancouver’s Jacob Tremblay “an amazingly gifted actor” who was only seven when they started working together.

Room is more a life-affirming, character study than a sensational crime story. Director Abrahamson explained, “I’m always interested in characters in extreme experiences or marginalized on the edge of living. You learn a lot about people in extreme situations.”

Donoghue “deliberately kept my kidnapper out of the spotlight,” because she “wanted to focus on how a woman could create normal love in a box.”

In Room we see the world through the eyes of a child. Don’t go in expecting an action movie. The story is not sensationalized or graphic, very different from ‘to catch a predator’ thriller like Prisoners or The Captive, Atom Egoyan’s 2014 film starring Ryan Reynolds. (Beach trivia: The Captive has the last screen appearance for local hangout Dip’n Sip Donuts on Kingston Road at Main Street, future site of ‘The Southwood’ condos.)

I spent a good part of my last year of university studying his poetry in-depth. A challenge dealing with his brilliant, difficult words and mind.