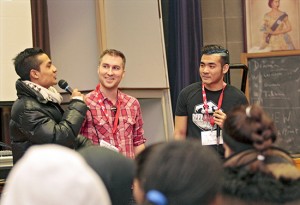 Filmmaker James Brylowski, centre, listens to an impromptu rap by a student who quickly took up Brylowski’s advice after a film screening at Greenwood Secondary school on Feb. 25. Brylowski, who wrote, directed and produced the mockumentary short A Mile in These Hooves, told students the best way to land work in film, music, and other careers is to just get started.
“I think that’s what it’s about,” he said. “Pick up a camera, shoot stuff and show people what you can do.”
PHOTO: Andrew Hudson