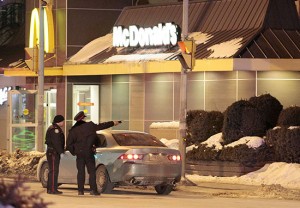 FEB/28/2015 – TORONTO, ON – Police investigate the scene of a shooting that left two men dead at a McDonald’s restaurant on the Danforth near Coxwell early Saturday morning. The males allegedly got in to an altercation with an armed security guard before shots were fired. Both men were pronounced dead on scene. Photo by John Hanley/FREELANCE