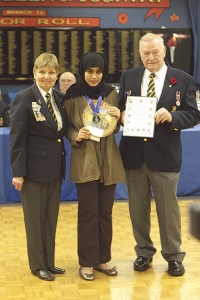 Local Grade 10 student Zara Ahmad recieves awards and a bursary for her silver medal in an Ontario public speaking contest on June 4 from NATO veteran Brad King and Helen Pearce, youth coordinator at the Royal Canadian Legion on Dawes Road.
Ahmad’s speech was about violence against women, and how it is still a social problem.
“A lot of people think women have equal status to men, but that is ridiculously untrue,” she said. “It is still a problem.”
As a young Muslim and a leader of the women’s empowerment group at Bloor Collegiate, Ahmad said she wanted to do what she could to highlight the issue.
“It’s not just in Muslim society,” she said, where some extermists misinterpret the Qur’an to advocate violence. “It’s all over the world really.”
PHOTO: Andrew Hudson