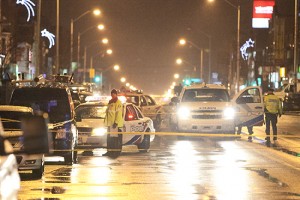 Two men were shot and killed on March 19 outside of the Mediterranean Social Club on Danforth Avenue near Patricia Drive. Police were called to the scene at around 8:45 p.m. and found Jonathan Stefan Khan, 21, and Shawn Chestnut-Reddick, 22, both suffering from gunshot wounds. They were both rushed to St. Mike’s Hospital where they were pronouced dead. Police are looking for at least one suspect seen leaving the scene.