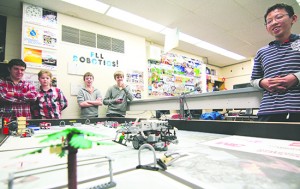 Glen Ames graduate Gregor Browning, left, watches with some of the Grade 7 and 8s on the school’s current robotics team as their typhoon-fighting LEGO robot rescues a human figure in practice run before the provincial FIRST LEGO League tournament in Oshawa on Jan. 18. Glen Ames came first among the 32 Toronto schools competing at a qualifier for a spot at provincials this year, an achievement based on their near-perfect robot challenge and a typhoon education campaign during which they raised more than $3,000 and 17 boxes of supplies for a school hit by Typhoon Haiyan in the Philippines.